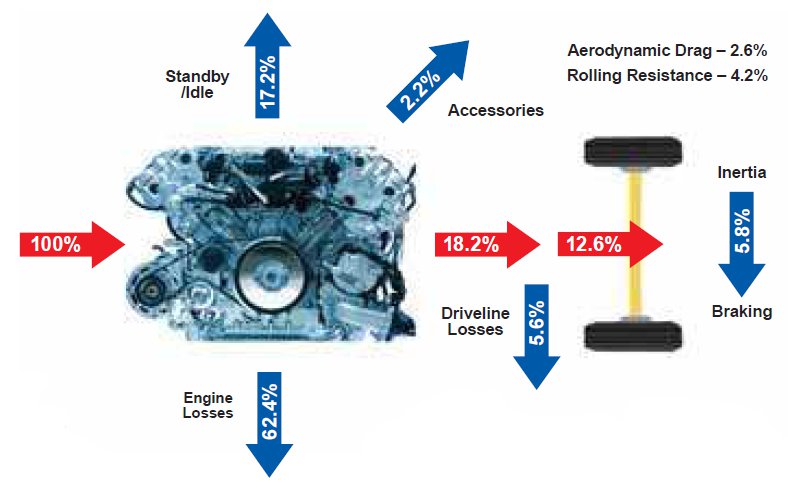 The article shows where most of the energy associated with a unit of fuel is consumed or wasted by a vehicle. The spoiler is that only about 12.6% of the fuel energy is passed through the system to drive the wheels of the vehicle. Think how your fuel economy could improve if you could decrease wasted energy by friction – even small gains in reducing friction will add up at the pump.

Some of the AMSOIL fluids you can install in your vehicle to reduce friction include:

Standby/Idle cannot be modified very much. You’ll always get that red light now and then. However it is good to know that newer vehicles don’t require much warm up time – if any – and most municipalities have implemented clean air idling laws which restrict idling times to a few minutes. It is easy to see how a difference of 18% would cause manufacturers to publish city/highway fuel economy numbers.

Accessories like air conditioning you can modify but I’d rather enjoy a cool cabin since my daily commute is not a race. The worst case would be having the AC on and the windows down which increases the aerodynamic drag of the vehicle and uses engine power to run the AC compressor. My general rule of thumb is AC on the highway and windows down in the city if it’s not too hot out.

Rolling resistance includes the type of tires you buy and maintenance of your brakes. A dragging brake pad or shoe will cause more friction through heat resulting in poor fuel economy.

The biggest factor in fuel economy of course is your driving style.
The faster you accelerate and the more you brake on the road the more fuel you’ll consume. I try not to drive in either extreme – just normal acceleration and try to match speed with the traffic around you. Don’t be the guy tailgating and constantly touching the brakes.