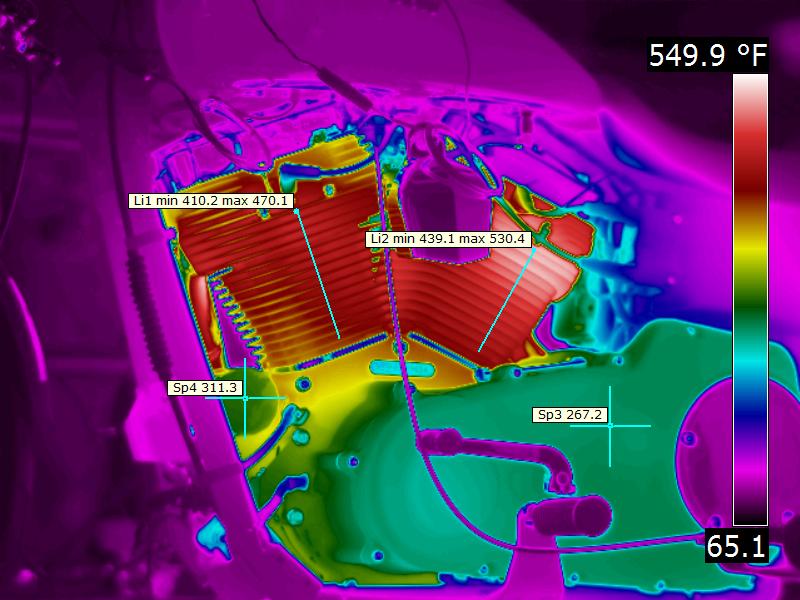 To demonstrate its extreme-heat protection qualities, AMSOIL 20W-50 Synthetic Motorcycle Oil (MCV) was subjected to a dynamometer test designed to simulate conditions even more extreme than the demanding stop-and-go driving conditions of a motorcycle rally or parade route.

A 2012 Harley-Davidson FXDB Dyna Street Bob motorcycle equipped with AMSOIL 20W-50 Synthetic Motorcycle Oil was operated for 68.5 minutes at low speeds, with significant idle time broken by engine revving and little to no air moving across the cylinders. Like most Harley-Davidson motorcycles, the Dyna Street Bob features an air-cooled V-twin engine, which relies on cooling fins arrayed along the cylinder walls to conduct heat away. To create the most-severe operating conditions possible, the electronic temperature controls, which safeguard the motorcycle when temperatures reach dangerous levels, were deactivated. The test subjected the oil and engine components to intense heat not normally experienced in the real world, with cylinder temperatures reaching more than 500°F.

The extreme temperatures were no match for AMSOIL Synthetic Motorcycle Oil. After nearly 70 minutes of torturous testing and heat exposure, oil analysis revealed no change in oil viscosity and only minor levels of oxidation, TBN depletion and wear.

For more information about which AMSOIL products are suggested for your bike or to place an order contact me.